Just another day in the life … The minute I crawl out of bed, I put on a pot of the ‘Nectar of the Gods’. Brushing my teeth while computer boots up, the coffee is soon ready. I diddle around for far too long on the computer, until I am warmed up to paint.

I discover in my email an invitation to join someone’s blog community, so I check out his profile. He is in France(must be those translation tools again), looks to be about twenty something, and has four pictures of himself, shirtless, showing off a six pack, if indeed it is him. I look at his blog. He has five hundred and thirty five friends, with a tag someone has left him, asking “How many of them are close friends?”

I go off to the studio with another coffee and chocolate chip cookies for breakfast. I find it helpful to take breaks between painting sessions, and I usually pick up on my way through the house, a fragile attempt at housework. Sometimes I even cook something.

Paint some more, even though the housework is only half finished. I decide to take a bath. I book a couple of client appointments while I am in the bath. Usually I have a bath before I go to work, so the cats immediately start sulking, convinced I am going out, and they won’t get playtime in the yard.

I take them out, my hair dries in the sun, reading ‘Art and Fear’ in the garden, while they wait for me to drag a stick across the ground, so they can fight over who is going to get to chase it first.
I notice the sun is going down, spectacular with the smoky haze coming from the fires in Montana. It casts a golden glow.

Leaving the cats in the yard, I stroll down the alley tripod in hand, hoping to find an optimum place to capture the sun. People go by, on bicycles, in cars, slowing down to stare at this woman in the middle of the street wearing a sarong & flip flops.

One guy went by on a crotch rocket, and gentleman that he was, even ducked while he zoomed past me. Then some cab driver slowed down to stare, as he was blocking my view as I was trying to catch the sun before it dropped below the horizon. I am thinking to myself, take a picture! It might last longer!

On my way home I discover an apple tree with fabulous fruit. Just as I am thinking of picking the forbidden fruit, I see a woman getting into her car, as she is leaving the church directly behind me. Strikes me funny, as I feel like Eve in the Garden of Eden. So I wait for her to drive off. In no time I have too many apples to carry, lifting the top layer of my sarong, it becomes a basket. 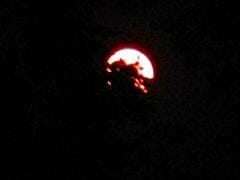 I know it is a full moon, brightest of the year, so I wait until it is dark enough to get a decent shot.

I head outside after nightfall, tripod in hand once again. Just as my flash goes off, a cab driver who is speeding down the street, slows down the minute he sees the flash go off.

I know right away he thinks he has been nabbed on photo radar. He stops at the stop sign, looking back, but in the dark all he can see is a figure, and the streetlight gleaming off my tripod. I find it humorous, as I am sick of people speeding through the neighbourhood. So he comes around the block again, just to see if he has really been caught.

Now here I sit, still on the computer though I have to work tomorrow. The light is still on in my studio … I had planned to be back in there this evening … so I burn the light … a flimsy guarantee. I had done affirmation in a promise to myself this painting would be finished today.

There’s always tomorrow … just … another day in my life.

A Day in the Life was last modified: January 27th, 2019 by Deborah Robinson

All the photographic images on the website are by me. Inquire about purchasing prints or licensing opportunities. Deborah Robinson © All Rights Reserved
21,819 spam blocked by Akismet