Chick With A Camera 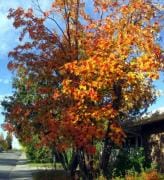 If you are ever wondering how to draw a crowd, or muster up some attention, let me give you some simple advice. Stroll downtown, with a digital camera, and a tripod. The tripod is a prerequisite. Carrying only a camera will take away from the effect. You will be too inconspicuous.

Yesterday was the last predicted day of warm sunshine and yellow leaves. In an instant, one strong wind can carry away the leaves, usually prematurely. My mission was to take as many pictures as I could. Downtown, I stopped in a park, snapping a few shots, when a couple strode past me, and began looking up to the top of the high rises and all around. For the life of them could not figure out what they were missing out on. Truth is it was right under their nose.

Our extensive pathway system here, is meant for anything on legs, or wheels, just so long as it is not motorized, with the exception of wheelchairs. Yet the person on foot does not seem to be favoured. People whizzed past me on roller blades, and bikes. Two people on bikes whizzed past me in a huff, obvious disapproval of my being set up in the middle of the path.

Taking the bus to Inglewood, and walking alongside the river via the bike trails. Surprising to me no one else was taking in the leaves or photographing them. Most were oblivious to the leaves, the sunshine, the beautiful autumn day. They simply went on about their business.

One couple caught up to me on the bridge, for a moment looking at the photo I was composing, “That’s a beautiful shot,” the woman remarked.

“Yes, I have gotten some good ones today. The leaves might not be here tomorrow.” They nodded, “Supposed to rain tomorrow,” the guy remarked as they continued past.

Once by the river, I went down over the embankment to get a few close up shots. Some guy walked past me carrying his shoes walking over the stones to the river’s edge. He called out to me, mumbling something about friendliness, pictures or something. My attention was focused elsewhere.

I smiled & nodded, not wanting to appear unfriendly, nor to put my safety in jeopardy. No sense encouraging nor inviting something undesirable. I continued taking shots, and to my disbelief, I watched him walk into the water, fully clothed in his sock feet, still carrying his shoes. He arrived at a piece of driftwood some way out and was flailing his arms and shouting something. The commotion, it turned out, was a ploy to get me to take his picture, which I did not do. 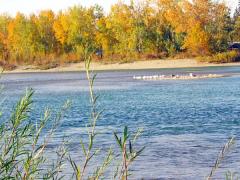 Further along, I realized I was in ‘tent village’, where the homeless have makeshift shelters and tents, directly under the signs which said ‘No Overnight Camping’. A woman stumbled out of the bush, catching up to me at the river’s edge.

“What are you filming?” shading her eyes from the sun with her forearm.

“Just taking a few pictures.” My low battery light was flashing. “But I am done. My battery just died.” Completely unaware I could be arousing suspicion, I followed her back to the path. She was thin as a rail, her manner dubious. It wasn’t until farther along in my walk, that it occurred to me, I was an outsider in her eyes, and not to be trusted.

To my disappointment, I saw birds in flight which would have made for a good picture. I did manage one hundred fifty-five pictures, adventures aside. Not bad for a short afternoon. Something about a chick with a camera & tripod, which is sure to create interest on an otherwise boring Autumn afternoon.

Chick With A Camera was last modified: January 27th, 2019 by Deborah Robinson

All the photographic images on the website are by me. Inquire about purchasing prints or licensing opportunities. Deborah Robinson © All Rights Reserved
21,820 spam blocked by Akismet