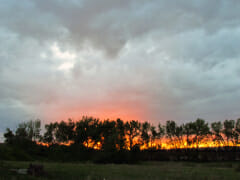 The winds of change have been blowing strong. I have a sense that I could not go back now, even if I wanted to.

Cool night wind on my skin one evening recently did not chill me. It only served to freshen my awareness of the changing landscape.

This magnificent sunset prompted me to pull over. Later that night the sky cleared revealing the big dipper directly above. The night sky sprinkled with sparkling mystery. Nothing could have foretold the natural disaster that followed.

The state of emergency in Calgary was lifted two weeks after it began. Flooding has resulted in much damage and a long road to recovery lies ahead. Much has been lost but the spirit of the people has really strengthened community. I am saddest about the many parks and natural areas which have been altered dramatically. 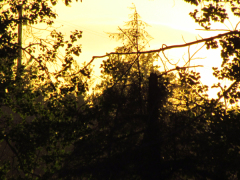 People have stepped up in a big way and magic is occurring. Basements cleared of mud and silt, ruined appliances moved out and tons of garbage removed. We know what we can do under pressure.

Cooperation and collaboration allows us to do more than any one person could do on their own.

I am thinking of the opportunity the flood can bring. Perhaps the cleansing will help people to start fresh. It may prompt less emphasis on external and material things. More people now understand what it is like to be displaced and the evacuations did not favour any particular economic group. Having seen the speed with which temporary housing is being created, I wonder if we could end homelessness.

In my own life I have seen how nothing stays the same, not for a moment. And most things are temporary. I have been afraid to jump, and now that I have, I see the cause of pain and misery is resistance.

I am beginning to understand what free-falling feels like. I am creating my own life, making it up as I go along. An art project has come my way, a small mural. I have a music gig next weekend. It’s a start. I trust the universe will send me what I need.