Has anyone noticed the differences of colours in the sky since the eclipse? The very next morning the sunset had a pink glow, and that evening the sunset was as gold as I have ever seen it.

There seem to be particles in the air, as I also captured this sun dog. 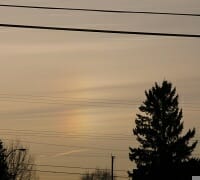 Reports have stated a meteorite hit the moon during the eclipse, and also one apparently set down in Washington, so I think our atmosphere may be experiencing some fallout from that.

This little bird looked very sad to me, and I am wondering if the remains near the bird feeder that I found the other day may be the reason. Could it’s mate have been the victim of one of the neighbourhood cats? They like to venture near the bird feeders here, in search of a smorgasbord which apparently this one found. 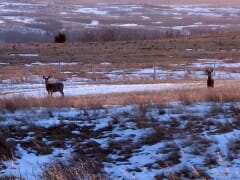 Here are some deer that spotted me during one of my recent photo excursions. There was quite a group of them, feeding around dusk, as I was capturing some sunset over the mountain shots.

Another week, I have resorted to list making to try to maintain my focus. Finishing off a commission, so the peonies had been put aside this past week so they will be once again on the easel. Enjoy your week, and stay on the sunny side of the street!

All the photographic images on the website are by me. Inquire about purchasing prints or licensing opportunities. Deborah Robinson © All Rights Reserved
20,327 spam blocked by Akismet