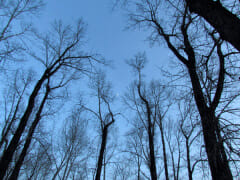 2012 is well underway, and I started this blog post in January. Hopefully some of you are still out there, and have not given up on me.

My feeling is that it will be a good year. So much is shifting and changing and I am going with the flow.

I have been striving to check off the unfinished tasks I began the year with. Tasks which I never imagined would have carried on so long. As I complete these, I move forward. 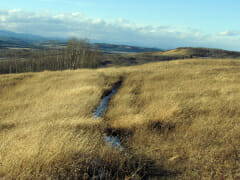 We have had a mild winter so far. A photo excursion to the Leighton Ranch was refreshing,former home of the artists A.C. Leighton, and his wife Barbara.

What a spectacular viewpoint of the mountains from the foothills! The Chinook winds were pounding me, a few pools of snow between trees in sheltered areas was the only evidence of winter.

I completed my Reiki Level One training, and I am slated to do Reiki Level II on the last weekend of March. So far, a permanent job has not shown up for me. I never dreamed I would be out of work so long, thinking my two year stint as Director of the Music Academy would help me to slide into another position easily. However that was not the case, and apparently I have not found my people or where I can add most value yet.

I have been taking this abundance course through the Daily Om. This course employs many Feng Shui cures, and assists one in shifting the energy to make way for new and wonderful things.

I have had time to study and meditate. Some of my time has been spent practicing my music and regaining my confidence as I intend to perform in the near future. I am teaching a couple of students privately. I am working on a painting that I did not finish in time for my last show, two years after the fact. Better late than never.

All the photographic images on the website are by me. Inquire about purchasing prints or licensing opportunities. Deborah Robinson © All Rights Reserved
17,659 spam blocked by Akismet