I wanted to share with you what I am working on, at the moment. I have read about the Flemish Seven Layer technique, which was developed by Oil painters during the Renaissance, and is still used today. Some say this technique was perfected by the oldest of the Van Eyck brothers. 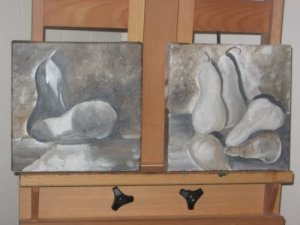 The era of Flemish painters spanned the 14th to the 17th century. I do not have formal training in art, yet I have done some study on my own. My experiment is to modify and adapt this seven layer Flemish technique to acrylic paints.

In this first installment, I present the Grisaille underpainting, done with raw umber, titanium white, and ivory black. In this layer I am establishing the value underpainting.

All the photographic images on the website are by me. Inquire about purchasing prints or licensing opportunities. Deborah Robinson © All Rights Reserved
20,838 spam blocked by Akismet