The Art Show was a success from a creation standpoint. Attendance could have been better. Sold enough to cover costs and then some, though sales did not reach the goals I had set. 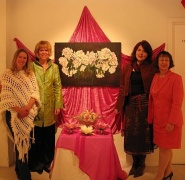 The process which surfaced during the planning and executing of the show was a necessary one, if only a dress rehearsal for next time.

Having all of my work out there, was an emotional experience. In fact, the amount of emotion I encountered came as a surprise to me. Experiencing the expansion of all of them together in a free open space was expressed to me the magnitude of what I had created. 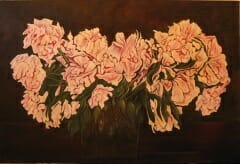 The peonies were finished in time, and they were the center piece. I was varnishing this painting and others at five am the night before the show.

The venue was an old brick warehouse building, with one of those old manual cage elevators which added plenty of character. To add drama, the signature piece, which was on the posters, disappeared mysteriously during setup. I was upset, naturally, but did not want to ruin the spirit of the show. Imagining larger forces at work, my thoughts went to what the message could be.

On Google, I encountered a website which allows artists to post lost work. In my frantic moments I emailed the people at Stolen Art dot Org, and they responded. As it turned out, I did not have need of their services.

Miraculously the lost painting reappeared in my portfolio case as we were dismantling the show. Seems the lotus was too shy to show itself. My blessings are being counted. Some stories have happy endings. Perhaps it served as a reminder not to allow what you do to become your identity. 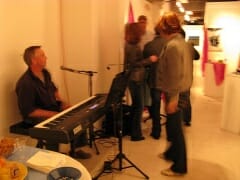 Fewer people and modest sales did not detract from a truly fun time. Along with the visual art, live music both days, from yours truly, as well as various piano players, singers and conga players who stopped in. This picture is from Friday night.

Those in attendance Sunday afternoon were treated to an impromptu concert. With Alan Weller on piano, Ron Grams on congas, and myself on vocals, a variety of jazz-blues standards were performed. Some danced, some sang along. Hoping to post some of those pics as they become available to me.

Donning my musical entertainer personality for the first time in several years, reminded me of just how much fun I have been missing.

A musical duo is in the works, with the first rehearsal just around the corner. I am very excited about once again returning to the music. Seems every experience in life leads us to where we are supposed to be.

All I have to do is pay attention to the sign posts the universe sets up for me.

All the photographic images on the website are by me. Inquire about purchasing prints or licensing opportunities. Deborah Robinson © All Rights Reserved
18,176 spam blocked by Akismet