Here is the wall hanging as it stands at the moment. Seven feet high, and 1.3 ft wide. I have plans to add more detail and of course it will be mounted on bamboo dowels. I just love working on bamboo-it’s a very Zen experience.

The background is not really yellow as it looks here, although I think it looks good, and I wonder if I should add that. This developed into a wall hanging from a would be mural, so it can be removable. As in any creative project, it eventually comes together. Once the incubation is complete, then you just know!

The moon is not yet full, though already it shines brightly through my south window. Some strange happenings around here this week. The robins are gone gone gone-how quickly they leave the nest. They vanished two days ago. I was concerned they had fallen prey to the scavenger birds. Even if that was the case, nothing can be done about it now. I actually felt lonely without them, and I think the cats were even sulking, but probably for a very different reason. Apparently it only takes a couple of weeks to flight time from birth, so I am wondering if they moved somewhere they perceived to be safer.

The other thing that was odd, was someone-not mentioning any names-sent me an email forward about spiders in a bathtub last night. It was deleted without viewing, as I cannot bear to look at spiders. While tending to my chores today what do you think I spotted in my bathtub???

A glimpse from the corner of my eye revealed the largest spider I have ever seen in this town. I was terrified, seriously contemplating retrieving a neighbour to help me out. At one point I was armed with rubber gloves, a shoe and a broom, but eventually I boiled the kettle, pouring the boiled water into the tub until the intruder met his demise. It took everything I had to build up the courage to eliminate the problem. 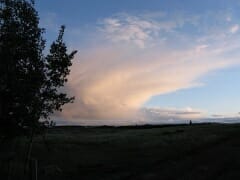 Seemed so foolish, yet the fear was real. What do you think happened here? Did the very thing I was afraid of cause it to appear? This seems to be about what fear can create-what it can manifest! My mental model of reality was distorted, obviously the thing cannot hurt me, so my reaction was out of proportion.

Here is a Steve Pavlina Podcast, which I listened to tonight, which you may find is worth having a listen to, especially if you have been struggling with fears and/or anxiety. We have had some amazing cloud formations around here lately. So I will leave you with the pleasant rosy image and wishes of wonderful full moon energy. 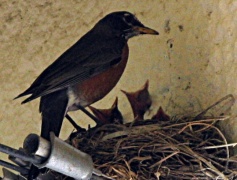 With the increase of the light, things are expanding around here. I managed to capture feeding time. This proud Mom is very attentive, as is the father. They take turns tending the babes, and feeding. Fascinating to watch, as the cats can attest to.

The house painting continues, but may be delayed by rain. I sure hope the forecast is wrong as rain is called for all week. Loud chatter of the sparrows, a harbinger of rain, diminishes my hopes of sunshine. It would be nice to get it done, so work can commence on the garden. 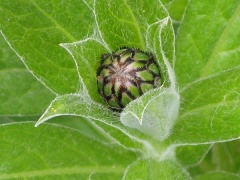 Unfortunately ladders and gardens do not mix well, and so my garden has taken a beating, due to heavy traffic in the wrong areas.

Despite heavy guarding, two out of the three peony plants I put in last year have been damaged. However this is coming up on the other side, which I think is bee balm that I planted last year. 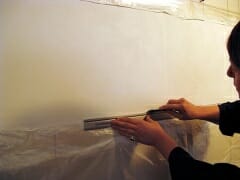 Progress continues on my wall hanging project. I have cut the support to size, and have taped it to the wall upstairs, where I have high enough ceilings.

The subject is sketched out and paint set out on the palette. I begin marking in with paint. This is blue bamboo, a variety which originated in the Himalayas. What a lovely subject to work on!

Bamboo is a symbol of expansion and abundance. 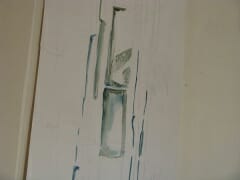 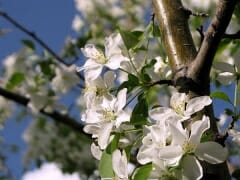 The air is heavy with fragrant blossoms, which are multiplying daily. Things are becoming lush and green from all the rain, which is ongoing.

The house is being painted, and the painters have told me they saw the robin eggs and there are five!

I am purging in preparation for a garage sale. The universe cannot possibly deposit good things here, as there hasn’t been any extra space.

Ma, the space around things which creates form, like silence between the notes, so very important in finding the essence. Making space around things, making breathing space, concentrating on energetic space. In visual art, it is what is known as negative space, the area around an object, a resting place. 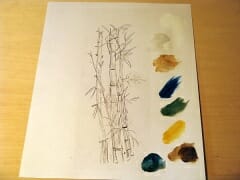 Here is my current project: Blue Bamboo. It was going to be a mural and now it is going to be a wall hanging, as the client wants it to be removable.

I have stapled the fabric to the wall horizontally, as it is over seven feet long, and my studio ceiling is not that high.

This picture below was created with the use of my camera’s stitch function. Once the support is prepared I will then hang it vertically, probably upstairs where my ceilings are higher, to work on the subject matter. 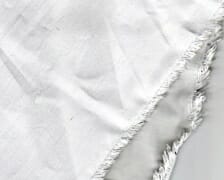 It has had many uses since it’s invention about 1600, including clothing, upholstery, window shades, and bookbinding to name a few.

The surface has a sheen on one side, produced by putting the fabric through a series of hot rollers during the manufacturing process. Though a versatile fabric, it turned out to be as rare to find as hen’s teeth. This type of support can be also attached to the wall, creating a removable mural by hanging like wallpaper. 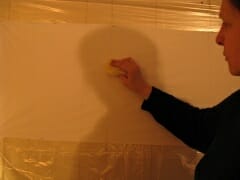 I had to re-staple some areas, as I didn’t get it smooth enough the first time. First I am removing any lint and dust with a tack cloth. 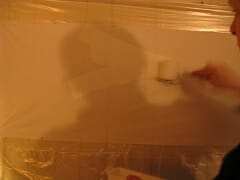 Then I am priming the surface with gesso. Application with a roller guarantees a smooth even finish. 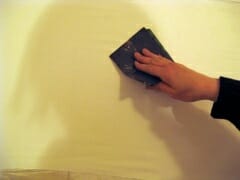 The surface is lightly sanded between coats of primer. Once primed, the support has the feel of a fine paper. 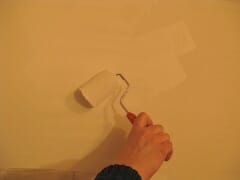 Two coats of primer are applied to the front, and one to the back. Once dried, the support will shrink.

As this is a form of stretching the cloth, you must use something slightly bigger than you want your finished piece to be.

Now I need to cut it to size, measure twice, cut once. Then I will begin working on the subject matter. Stay tuned for the next installment! 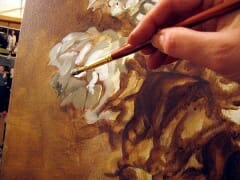 Thank you all for your kind words of encouragement. Now I am beginning the dead layer. Like a rabbit hopping from place to place, adjustments are made as I see fit.

I have often admired artists who can start in one area of the canvas, moving systematically to completion. However, this does not seem to be me, so I will work in the way which is comfortable.

Miramazing expressed interest in this technique, so I would like to direct her, and anyone else who wants to read more about this classical painting technique, to the website of artist Alexei Antonov where I first discovered this.

He has done an amazing job of reviving long forgotten techniques of classical painting. And his paintings are very beautiful. When my new found abundance rolls in, I shall purchase all of his technique videos. 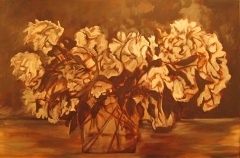 So this is my progress so far on the dead layer. Much more to do yet on this layer, two feet by three feet is a large area to cover. When this layer is done, the fun part will begin. Glazing over the various values with colour tonalities is one of my favourite parts.

So what have I learned thus far? I can create beautiful things when I open myself to the flow. The flow comes from alignment within me. Each phase of creating has its merits, as does the light, the dark and in between. The only thing that exists is what I have created for myself. I will post more as soon as I have more to show. 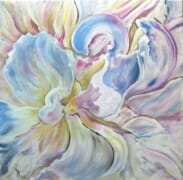 The work continues on my two latest. I am concentrating on allowing the natural process of art to flow from the unconscious, while hopefully not engaging interference from the ego.

John Ruskin explains in his book Emotion and Art how it is not the stages of creating art which are problematic, but the mismanagement of these states which are the issue. This is a very good book, not only for artists, but also for anyone who is working through emotional issues.

In reading this, I was able to understand my difficulty in finishing works. I thought it was my perfectionist tendencies. Now a new light has been shone on the subject. I have been mismanaging the stage in the artistic process which comes after a finished work, which most often includes depression.

So depression is not the problem, it is our inability to manage this. Who wants to be depressed? Wouldn’t it be better to be in a high state all of the time? This is not a realistic plan, although the subconscious rapidly processes things, without our knowing.

This is a good way to end up in a burnout situation, as you haven’t allowed the lows to balance out the highs. Suppressing negative feelings is what got us into difficulty in the first place. Using this time to replenish our energy, will keep us in an optimal state. Moving with the ebb and flow of life, allows us to manage each stage. The artistic process, properly used, can promote healing and spiritual growth.

It is important to create awareness around the feelings that come up, while being able to step outside those feelings. Ruskan suggests we observe them from a ‘witness’ perspective, rather than becoming overwhelmed by them. Being on overload is not going to make us receptive to anything. Naturally it will encourage us to reject these feelings. This provides ample opportunity to project onto others. We are trying to achieve balance. Part of doing so includes opening the window to the unconscious. We need acceptance for all that flows through us.

You may have heard about the death artist Ken Danby, only 67. If you would like to express condolences or comment this blog has been set up for accolades. He found his fate while canoeing in Algonquin Park. Tom Thompson, artist of group of Seven fame, mysteriously disappeared in this park, and was found to have died there.

All the photographic images on the website are by me. Inquire about purchasing prints or licensing opportunities. Deborah Robinson © All Rights Reserved
20,839 spam blocked by Akismet