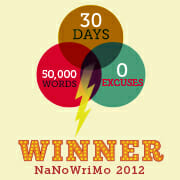 Well I did it! I surpassed 50,000 words, with a few hours to spare. This year, things went much slower for me, but then I had a couple of big pushes that drove me over the finish line.

It is a great feeling to achieve the required word count, despite the fact that the book itself is not finished. Of course this is just the first draft. I really feel this one is worth completing. I am going to reserve January for the rewrite, and I will pick away at finishing the first draft until then.

The novel is entitled ESOTERICA and the genre is magical realism. Oh and I even designed a cover this year for fun.

Story of woman artist, a sculptress, set in New York in the early twentieth century, whose family immigrated to the USA during the Mexican Revolution. Malinali Gohl was a trail blazer in the New York art world.

Malinali perseveres against all odds in a sea of tension and opposites, creating alliances that propel her into new worlds and uncover creations that will survive the test of time. In order to do so, Malinali must overcome ancestral patterns, illusion, discovering her inner visions and holding them steadfastly, while purifying her heart to make way for inspiration.

A journey of: Intuition – Illumination – Inspiration  The Angel of the Presence, which guides her addresses and supplies the solution to glamour, unveiling the authentic and uncovering the truth.

One deadline down, I can now move on to my next set of commitments, including two showings of art during the month of December. And there are parties coming up too! If you are at Waves Coffee- Springbank, be sure to take a look at my art which will be on display & for sale during the month of December, beginning Sunday, December 2, 2012. The address is 160- 30 Springborough Blvd S.W

Come and see me at Calgary’s newest craft fair, in Bridgeland on December 8, 2012, where I will have an assortment of smaller to medium sized works and artist made gifts for sale at Bridgeland Riverside Community Association. 917 Center Avenue NE, Calgary, AB. Hope to see you there!

All the photographic images on the website are by me. Inquire about purchasing prints or licensing opportunities. Deborah Robinson © All Rights Reserved
21,892 spam blocked by Akismet