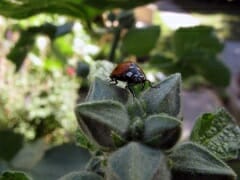 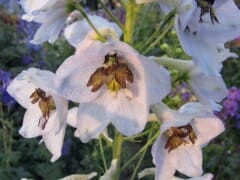 Fall Equinox has arrived. And the sheets were over the gardens a couple before that. When I went to cover my plants I noticed my neighbour had already covered his tomato and pepper plants. Only in Canada! 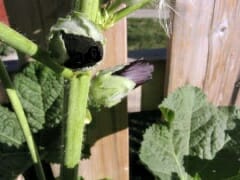 Despite evening frost we now have nice temperatures returning in the day time. We have had a heat wave with 33C yesterday.The Farmer’s Almanac predicts another cold winter.

The late spring which materialized was identified in advance, yet I really hope they are wrong this time. Still reeling from last winter. The long term forecast is calling for snow next weekend, and I am really hoping my black hollyhocks bloom before then. Better yet would be a change of forecast.

I planted these black ones two years ago, and they only come up every two years! This will be the first time I have seen them bloom. Mine are late bloomers much like me, they because of the large pine trees in the yard, and I do not have an explanation for me. 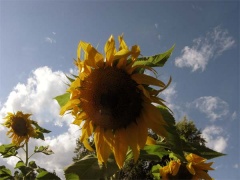 I drove past a house yesterday where I had been meaning to take pictures. They have a collection of the largest sunflowers.

By the time I arrived the wind had just begun to pick up. The bees were swirling around. I did manage to take some shots. Sunflowers are majestic and that is apparent when you see their massive stalks swaying in the wind, petals flashing. 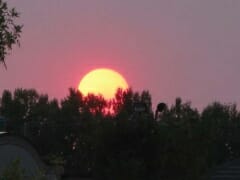 The sky has been a glowing red from the controlled burn in Kananaskis and I hoped to catch the sunset on digital. This one was taken outside my workplace. Since equinox I have noticed how the sun seems to be setting more rapidly.

I tried to make it to the west side of the city on Friday night, but the traffic has been so heavy. New construction zones pop up daily at random. Everything seems to take twice as long.

Crop circles in Alberta! Have a look here;
http://www.shrinesandsacredsites.com/

Not sure which planet has been so bright, but I suspect it is Jupiter, and it certainly has a presence. Now as I write this the moon is just rising shining in my west window. A pot of chicken curry on the stove, melding with the early fall smells. Now I am off to the studio to do a bit of painting.