Woke yesterday to softly falling snow, which picked up momentum throughout the day. The two nights before that had left me restless, with diablo style winds, which seem to penetrate the darkest shadow places. Here is what a mystery writer had to say about these sorts of winds:

“Those hot dry winds that come down through the mountain passes and curl your hair and make your nerves jump and your skin itch. On nights like that every booze party ends in a fight. Meek little wives feel the edge of the carving knife and study their husbands’ necks. Anything can happen.” ~Raymond Chandler, “Red Wind”

We are in for more winds tonight, as another chinook blows in. Sensor light on the front porch is flickering, sure sign the winds are picking up as I write this. The warmer weather will be welcome. After twelve Arctic winters the novelty of cold weather has certainly warn off.

I have spent two days laying about and sleeping. The effects of the time change were short lived as far as I could tell, yet today when I happened to check the clock it turned out to be earlier than I thought. Today I have been painting all day. Resting has proved it’s value. Throwing caution to the wind, I allowed the art take priority over chores, working on several paintings. Now signed, I declare this one, Both Sides Now 16 X 20, acrylic on canvas finished. 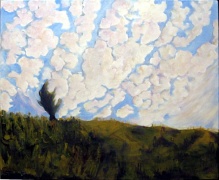 All the photographic images on the website are by me. Inquire about purchasing prints or licensing opportunities. Deborah Robinson © All Rights Reserved
20,302 spam blocked by Akismet