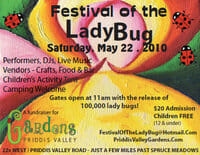 This is what I am taking part in on Saturday. A ladybug festival! It begins with the release of over 100,000 lady bugs into the pesticide free gardens.

I will be performing and showing my art. Sounds like a fabulous lineup, with music, fire-spinners, belly dancers, and a ten piece funk band. What fun to be part of this! If you are in the Calgary area, please come by and join n the festivities.

I drove to Priddis to check out the grounds last weekend, and it is a quaint unique place, hosted by Kelly. Now help me set an intention for fabulous weather!

What strong energy these days with lots going on to head up spring! I am having a personal day from work, a chance to catch up on personal things, and get ready from the weekend. Looks like I will have time to work in the yard and get things started. Blossoms are starting to appear, and perennials are coming up. 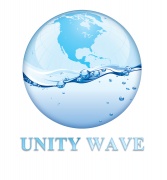 “Unity Wave was born in recognition of the need for an unprecedented response to coordinate a world wide, synchronized, outpouring of conscious intention.”

You will find me here in a few hours. UNITY WAVE will stream live, Friday for fifteen minutes, calling for healing and restoration of the Gulf of Mexico. We know about the power of deliberate intent, particularly powerful, when numbers increase.

Have a wonderful long weekend everyone!

The Arctic terns passed by yesterday on their migration south. The two shots I took were blurred unfortunately. Apparently these birds migrate from pole to pole! The were a glorious sight against the blue backdrop of sky. As I stood under the stars last night, silver dots graced the night sky, moving in a line and I realized it was must be night migration of more Arctic turns. 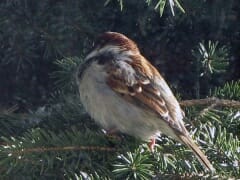 This little birdie outside my window sat while her mate busily readied the nest for her, which one can see she is in dire need of. Ah the miracles of nature!

So I have applied for a number of jobs-more than 130, and actually I have come to the realization no one is going to hire me! Not for an office job anyway, although I am more than capable of doing the work. I thought this type of work would be steady and help me get caught up financially.

Embracing the fear that I may not be able to get a job in the traditional sense of the word, I realized that what I was looking for is not in line with my original intention. Apparently the universe is trying to honor my initial plan-and it took a while before I clued in.

I do know that I seem to be unable to manifest anything that is not in alignment with my heart’s desire, and my choices must be for the right reasons. Now it appears I have pin-pointed what was holding me back and I will revert to Plan B. Not sure yet what that entails or how it will all come to pass. I do know I must follow my bliss incorporating my gifts, talents and passions, and the money will come. 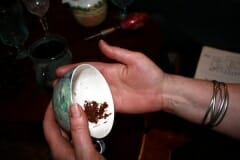 Last weekend I had a potluck to introduce my new house mate to my entourage. Had a few laughs, played some music-good practice for my upcoming gig in East Coolie, and read some tea leaves for fun.

You will find me taking photographs for a wedding tomorrow, and attending a friend’s birthday on Sunday. Not knowing what is about to unfold, I stand firm in my intentions with belief the universe has a better plan than I can dream up. Now … to get out of my own way as I head into uncharted territory. Ma Vida! 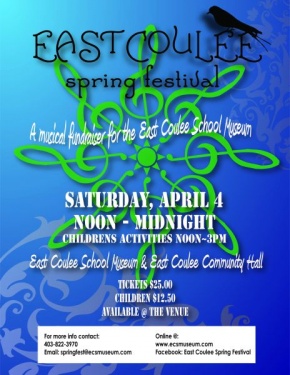 Some of you may have seen this already, but for those of you who haven’t-it’s a worthwhile ninety minutes. It will get you ‘thinking’.  It is in no way the be all end all. May this help you on your pathway!

Check out the Secret. 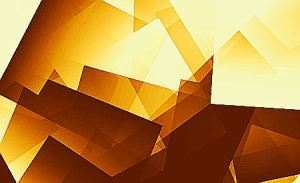 Intentionality as it relates to philosophy of mind, allows you to create your own reality. It begins with mindfulness, awareness. One must examine underlying thoughts and beliefs to better understand ourselves. Our thoughts are a result of our own values and beliefs, which often must be changed if you are to change your reality. In order to understand your intention you must examine your beliefs. Many of us have beliefs from our childhood which have remained with us. Unfortunately these are not the tools required to survive in an adult world.

Instead of looking to find ourselves, we build who we are.
Without the proper tools, your final result is likely to contain shoddy workmanship. By operating on yesterday’s beliefs you may find yourself coming up against that brick wall, time and time again. Thinking patterns are deeply ingrained. If you can change your thinking & your behaviour, then other things in your life can change. Taking the same approach you’ve always taken to solving problems, will yield the same results.

END_OF_DOCUMENT_TOKEN_TO_BE_REPLACED 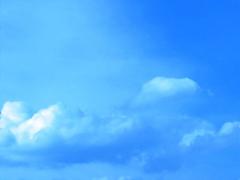 Intention is the act of mindfully focusing on a specific purpose. Your aim guides your planned actions, to achieve an anticipated outcome.
Art is a source of abundance and joy and purpose for me. My aim is to create beautiful works of art, and to pass them on for others to enjoy. Once finished a painting, I remove my hand from it. I release my art to the universe from whence it came, without interference.
Giving myself permission to let go with ease and joy, I allow my art to become a source of enjoyment and abundance for all those who purchase it. Intention is the first step.