… It’s been twenty six years … hard to believe. Working Class Hero, I am the Walrus, Strawberry Fields and Imagine were to be no more. Shock waves resounded throughout the world.

A peace-loving Beatle who offered so much joy to the world in the form of music, particularly his lyrics. Gunned down in New York, in front of his apartment building, an unlikely target. Who would do such a thing?

Do you remember where you were that fateful cold December day? What about the day Kennedy was shot … or when the world trade centers were hit? And where were you when John Lennon was shot? Milestones in our culture. I remember where I was Dec 8, 1980. Fort Nelson BC … it was fifty below. I was there to play music, part of my great northern tour of BC. It wasn’t all it was cracked up to be.

A closely knit town, far unbeknown to me, I had been seen breaking the ‘rules’, which were not apparent to any outsider. I arrived in town, just after the hotel owner had been charged in the death of his wife. When I went to the lounge that night still in shock. While picking up my regular soda with lemon,I asked the staff as if they had heard the news. I might as well have been speaking Greek. Not such a big deal to them, my disbelief felt as though I were in a time warp.

I got fired from the gig two days later… something about being seen talking to the wrong people. Small towns can be like that. I pulled out of town around midnight, in my cargo van. A raging snowstorm convinced me to take along two skiers hitching a ride out of town. Despite my rule of never picking up hitchhikers, I opted for insurance, in the case of any possible roadside emergencies.

Did I mention how one of my favorite pastimes is quoting John Lennon? Recalling his words in my life, time and time again, I think he was a seer. His lyrics ring true, even today. The man who had rallied for and sang about world peace, in bed, died of an act of violence.

Who can make sense of the absurdity of this world, the insanity of our times? I do know, even now, the loss still pains me and so many others. When the good go down, they leave an ever so thunderous, silent space … missed, and never forgotten.

I’ve always felt the the lyrics to ‘I’m Losing You’ on the final Double Fantasy album, was a premonition of his death. John Lennon knew his fate, even if only subconsciously. Coincidental? Maybe. You Decide. And remember … never give the power to the man who slay him, by speaking his name.

Here in some stranger’s room
Late in the afternoon
What am I doing here at all?
Ain’t no doubt about it
I’m losing you
I’m losing you 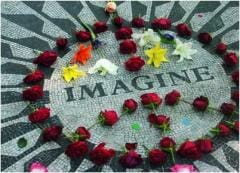