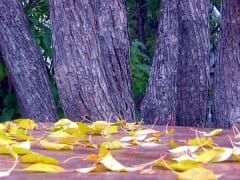 Table leaves-right? Brings that into an entirely new perspective. So many possible perceptions. When things go awry in life, the first thing I do is to try to figure out what the situation is trying to teach me. Sometimes the answer seems unreachable and mystifying. Not all answers come right away, usually revealed in time, though it takes a lot longer than you think.

In the meantime, living in the moment, doing what is in front of me, I am working on a commission which is almost done. You will have to wait until the patrons see it, as I want it to be a surprise. I plan to have them to dinner for the unveiling. 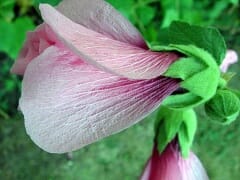 In the yard today I noticed new growth in the pots and in the ground. Hollyhock seeds from these very hollyhocks, which, I confess, I pinched from the churchyard down the street. Biennials, I planted them as soon as I got them, thinking they would be hardy if they went through a winter under the mulch.

I noticed today new leaf sprouts are coming up. I have never seen this, not in October. Remember, we are in hardy zone three here, at 3500 ft above sea level. I won’t be surprised if we have a really warm winter. It occurred to me today snow doesn’t really even seem like a possibility. Oh if it were only true!

This year is the strangest I have seen with plants still in the garden, and leaves on the trees. Baby robins, and baby squirrels abound. Halloween will be the true test. Rarely a Halloween occurs, before the first snowfall. Our uncharacteristic drawn out fall has been lovely for a change, even if it has been gifted to us by global warming. The Santa Ana winds, akin to our Chinook winds here in Alberta, are burning up houses in California too. That may be another sign of a mild winter. Things are different now. Not knowing the science of climate change, I only know how things have changed during the course of my life. 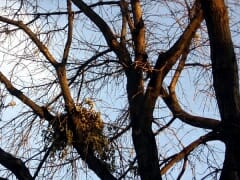 The squirrels are busy busy busy. Here is one nest that belongs to them in the neighbour’s yard, seeing one is a first for me. This is a prime attraction for my cats when we are outside. I have seen many potholes in my garden and I am secretly wishing the squirrels are burying lovely tulip bulbs from the neighbour’s yards, since I have not planted any.

Speaking of neighbours, my street is quiet. All of us who live on this side of the street get along well. While in the yard this afternoon, checking for the cats in their favourite cruising territory, I spotted a boy, who was engaged in some sort of activity, questionable I thought. His looking over at me to see if I had seen what he had done was a dead giveaway. He appeared to be throwing something in the yard two doors down, where the squirrel’s nest is. At first I thought he was maybe throwing rocks. I asked him what he was doing.

He had a flat metal box, which turned out to be a humane mousetrap, and he explained he was catching mice in their house across the street, and releasing them. Recollections of recent screaming, presumably children, uncharacteristic of this area rolled through my mind, as did flashes of seeing them in that yard. I thought of the man I know that lives in the house, whose yard he was coming out of and I thought about the rest of us too.

So I said, “Why are you throwing them in someone else’s yard?” I told him I thought the park might be a better idea, that it was not really fair. “Nobody else wants them in their houses either,” to which he replied his mother didn’t want him going to the park. He told me his mother makes him do it, and that he really doesn’t like doing it. David, seven years old, thinks the park is rather far away.

Just then, my neighbour came home to where the most recent captive pest had been released. I asked him, “What do you think about this?” I told him what was going on. “Am I the neighbourhood kook here or what?”
He said, “No, he shouldn’t be doing that. No wonder I have mice in my house! I have a trap like that too, but I release them down by the river.”
So I said, “What do I need to do here?” He says, “Well, talk to the mother.” 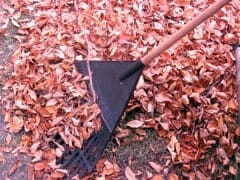 Yeah, right … so off to war I went, without an army. The boy didn’t want me to talk to his mother. I told him I wasn’t trying to get him in trouble. No one came to the door when I rang the bell, although I knew they were home. I asked him to get his mother, so she came to the window.

Apparently she says she told him to go to the park, “You don’t have to worry, we are moving in a week anyway.” I could see she was trying to cover things up, “I don’t think that is why that man has mice in his house, ” to which she added, “I am not dealing with things well right now. Get in the house David!”

“Sorry to hear that,” I said. “We are all having our challenges at the moment,” my two cents worth, for what it was worth. I strolled away, with the anticipation of seeing their hind ends (along with their yappy dogs) going down the road for the last time. Only a week away. Sigh. The mouse patrol will rest in a week.