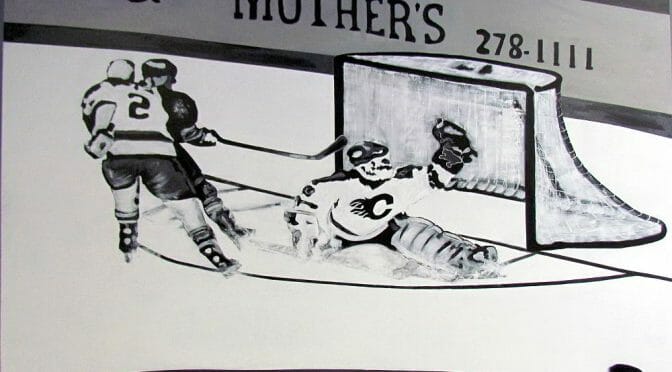 I just finished this hockey mural today for a new small business  Legend Hockey & Sports in Calgary. This piece is about 6 feet by 8 feet. I wonder if any of the Calgary Flames fans can guess just which play this is?

This was an excellent study in values, being black, white and gray which also gives it a retro look, which was the idea. I have shown WIP paintings before where I began with the Grisaille technique where one paints in gray monochrome. I find this really brings out the dimensional effect of the forms. The black and white also gives a retro look. Transferring the design and painting the mural took five days to complete, not counting the preliminary design work and shopping for supplies.

You can see other murals I have done here:  Murals & Decorative Art 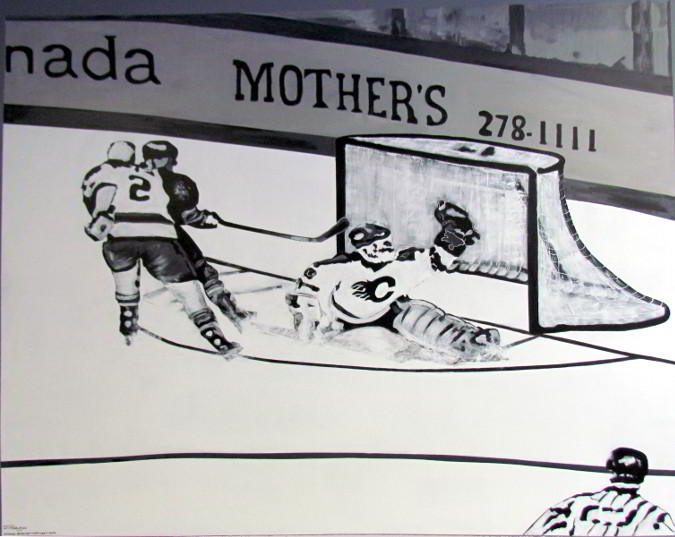 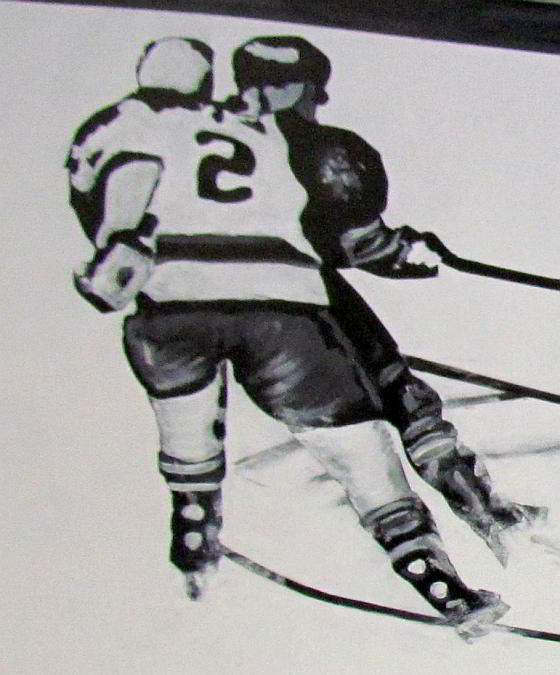 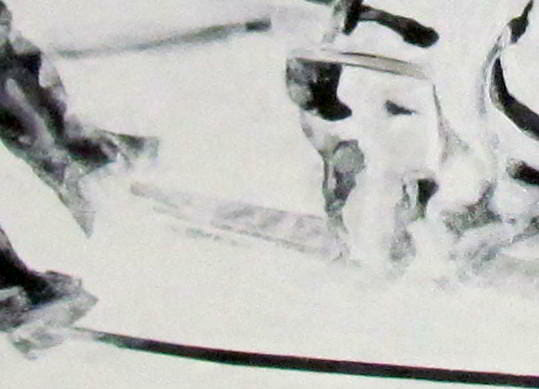 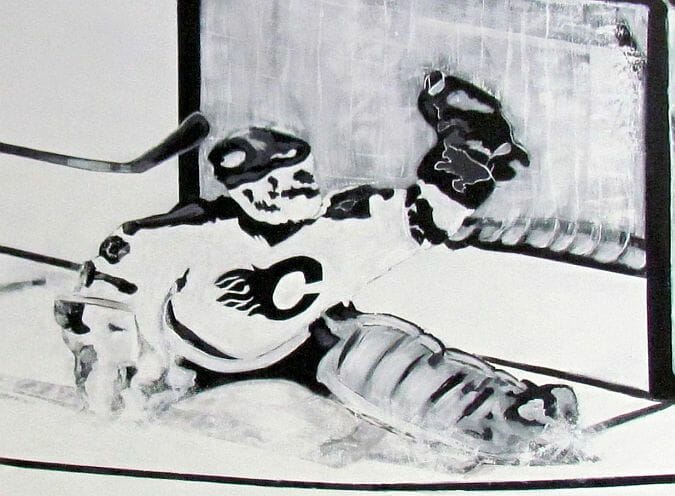 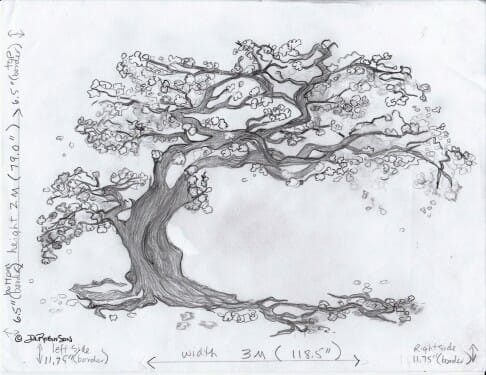 This is a sketch I did of the mural. The drawing is primarily for scale. The subject matter is organic, therefore, once I began painting I worked intuitively within the structure I had created. The wall was fourteen feet wide and eight feet high. I painted this in a master bedroom. An auspicious symbol, signing the contract on Chinese New Year was equally so. A great way to begin Year of the Horse. 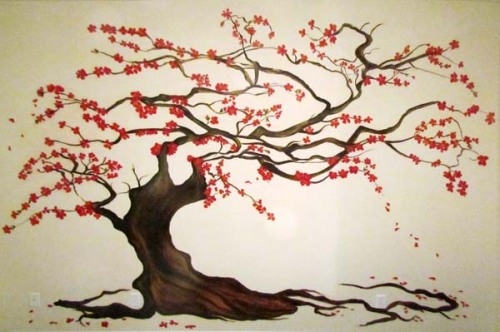 Here is the finished mural, although you cannot really get the feeling of the presence it has while being in the same room with it. Below, you can see some close up shots of the details, including the gold accent, which glimmers in the light.

Mural painting requires large brushes and ladders, but also tiny brushes, like the ones I use for my miniatures. The subject must look good from a distance, as well as close up to the best effect. I really enjoyed designing and painting this one, and I welcome any queries regarding mural commissions. 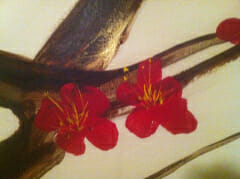 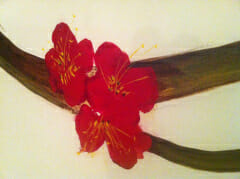 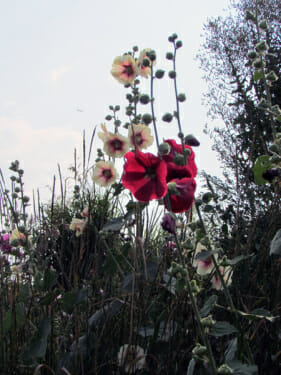 These hollyhocks were found growing on a hillside in an older area of the city as I drove by. Hollyhocks do not grow wild to my knowledge. Maybe the seeds were carried by the wind or by birds, or perhaps a house once stood there.

In my own inner garden, I have been stripping away the excess for months now, even years. My intention is to stay in clarity, because that is the only way I can make decisions. The lack of clarity had kept me stuck for a long time. Clarity requires us to stand our ground and to have a voice.

I played jazz on the piano recently for a wedding, and it felt so good. I was really immersed, feeling the rhythm. It took me to that place within myself that is really me. I was out of touch and now that I have found it, I intend to spend stay conscious of this gift. It’s a state of mind really.

Over time it has been increasingly difficult to fit myself into situations which are not me. Many times I have taken jobs, knowing I could do them, partly for the money and partly because of external pressures. At the time I never considered the consequences of going against the grain, not honouring my true self.

“To thine own self be true.” ~Shakespeare

Though I can do many things, I want to focus on that which holds the most meaning for me. For a long time I have been saying I must live my passions. It is the pathway to my authentic self and what I have always known to be true. I set that intention some time ago, and now the universe is conspiring to see that I stay on the path. Following the heart always feels right though I do feel like I am free falling. 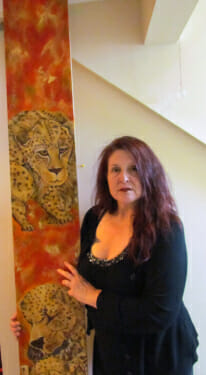 Ironically my ability to make my rent this month was supported primarily by my art. And that is the first time it has happened that way, so I think progress is being made.

This is a custom mural panel I just finished. It is acrylic on hardboard, with gold-leaf and mica flakes. The abstract portion is hard to show in a photo, but also has a beautiful smooth textured surface. It felt so good to pass on a commissioned work to its proud new owner.

Art is a language, a form of communication. Without an audience the cycle does not complete and art does not perform its full function, nor does the artist. And it is such a feeling of fulfillment to be able to pass a piece to another. What a feeling of bliss, when one is doing what one is designed to do! 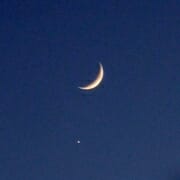 In case anyone didn’t get to see Venus in the Western sky around sunset last night, here a shot I managed to capture. Since I had forgotten all about it, the opportunity was purely by chance.

We are in the final countdown to the concert … which explains my absence from the blog-o-sphere. Many many details to cover, as the date draws close. It is going to be fabulous, although the jury was out earlier this week, on whether I would have the energy to attend.

And if that is not enough, I have been working on a huge mural for a design firm, which is featured in their designer showroom. The mural is only part of the environment which is being created, which also has waterfalls, salt water aquariums, and a beach floor. I would love to show you a picture, yet I won’t be able to since it is not my design.

Suffice to say I am painting rocks, waterfalls & moss on a super large scale. A lot of area to cover, I am enjoying it immensely. The first thing that struck me was how I love working in that environment. And what was going through my head was, “I am a working artist!” Fantastic. Not only am I doing something I love,the artist who has employed me is highly skilled, so I am learning new things everyday.

As the greenery and blooms expand all around, I am consciously overflowing with gratitude, reveling in the blessings being bestowed on me by the universe. 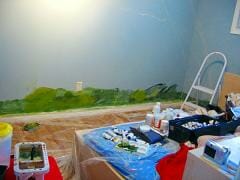 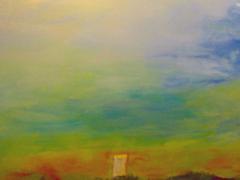 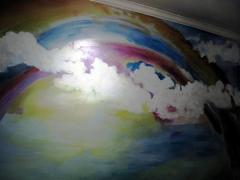 All the photographic images on the website are by me. Inquire about purchasing prints or licensing opportunities. Deborah Robinson © All Rights Reserved
20,313 spam blocked by Akismet