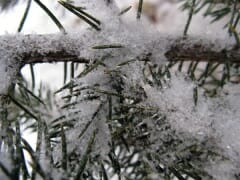 While in the midst of a snowstorm this very moment, I want to share an event I am participating in. So far 100,000 people are signed up already.

It’s a webclass with Oprah and Eckhart Tolle. “A New Earth”, Tolle’s latest book, is the subject of the ten week class which begins March 3. It’s free to sign up!

Be prepared to encounter traffic delays on the site, while they work to keep up with the demand. As Oprah says, this may very well be the biggest classroom in the world! Just think of the energy level!

I have been very inspired by Tolle’s writings, whose best known book, “The Power of Now”, has been known to affect change in thousands of lives. His new book focuses on awakening to your life’s purpose. Ironically, I had just purchased the book in December, which surprisingly, I found in the bargain bin.

May you have a truly peace filled weekend!