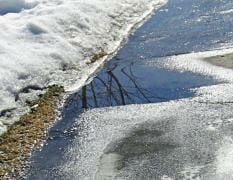 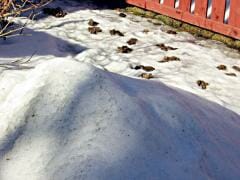 Don’t you just love the early spring, the day you first felt the sun’s warmth on your back in months. Birds are back, swooning over the rivers created by the rapid melt? Oh and let’s not forget the aroma of ‘Eau de doggie-do-do’ … its’ pungency permeating the air. ewwwwwwww … Well that’s the reality folks … shite ev’rywhere! Begin small rant – – >

Speaking of shite, the roommate experience/experiment has ended by mutual agreement. Too many cooks spoil the brew, not to mention the cast iron cookware. And now I can stop ironing my underwear.  And my Tupperware is no longer employed, not really keen on going to work in the first place.

Having outgrown my job, last week I began working in a new salon, only two blocks from the old. Heaven knows there is one on every corner around here. That’s right, the market is flooded. Sure way to get your heart rate up, if nothing else. Stress’ll do it, look at the plus side.

The rapid growth in the city has not significantly improved quality of life for many, even most. People are running around breathless, trying to keep pace with the insanity. Perhaps it is not the altitude after all, yet as an excuse it does suffice. Seems as though a boom produces far more casualties than success stories.

Shortages have appeared out of thin-air:good luck getting the kind of light-bulb-you-need, not to mention other staples. Empty shelves, I thought at first were due to staff shortages, no one to unpack things, then it turns out many things are back-ordered as well.

I waited almost two months for a pump for the kitties’ water fountain. Poor little darlings had to drink still water, when they are used to the running, fresh filtered kind. I told them, “I understand, it’s tough being a kitty.” Poor l’il fur babes.

So I am forging forward, doing what is in front of me at any particular moment, hoping I am on the right track. Determined. What I really need to do is sell some art! Another mural wouldn’t hurt either. Planning a strategy … but what to do first?! I will keep you posted. Oh, and don’t forget the time change this weekend … just when we finally get out of Mercury Retrograde. Let’s hope it works in our favour. Cheers! 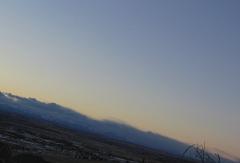 Cold nights bring out the brightness of stars, the dippers against a backdrop of velvet indigo. Fascination with galactic formations. Soft snow falling. Smoke trailing upwards from a nearby chimney. Midwinter melt brings a chilling to the bones. Uncertainty lingers in the air.

Running around out there can be taxing … rudeness, road rage, and a sense of entitlement everywhere you go. Surrounded by the growing numbers of sociopaths our society has created. You have to wonder sometimes where we are headed.

Oh yes, remember when we used to say if only the world were run by bartenders, cab drivers, and hairstylists? Well, I think we can officially add “bloggers” to that list. Have you noticed the trend in rejecting mainstream media? People are placing more faith in the common folk? I wonder why. Hmmmmmmm … something to ponder. Could it be we are winning the war?

Funny thoughts come to me at times. I was in the supermarket looking at the organic greens, neatly housed in containers made from genetically modified corn. Can you win? Not much better news at the doctor … they weighed me and I have gained twenty pounds! Yikes that was a shock. I knew my clothes were feeling a bit tight, but I was sure they had shrunk. Oh well, I guess my denial has been broken. Too much computer work and not enough activity, I suppose.

Speaking of broken … guess what I am getting in April for my birthday? A nose job! I know I know … my nose looks perfectly fine … on the outside. But it has been broken years ago, sinuses need work too, so finally I may be able to breathe properly. Truth is my health has not been so great … I have been fortunate to have experienced mostly healthful living, so having it turn for the worse comes as a shock and a challenge to manage.

I am struggling to regain balance in all aspects, which includes healing from the inside out. It is a crucial time for me and I am doing what I can to create a positive outcome. Fortunately for me, I have an array of stunning support people , who I am thankful for. They are desperately needed to go with a huge roll of work I have cut out for myself. And that has only just begun.

All the photographic images on the website are by me. Inquire about purchasing prints or licensing opportunities. Deborah Robinson © All Rights Reserved
20,804 spam blocked by Akismet