Back From the Desert

Well, Drumheller Arts Festival is behind me now. It was a hectic time getting ready to go, and we got away late. It is a miracle we made it there. Here’s my setup. It turned out the canopy I found on sale, a necessity, due to the hot desert weather, was somewhat complex to put together. It took a whole team, despite the caption on the box which assured me of easy setup. Fortunately, I found willing participants, who graciously offered their assistance. Even with the canopy, I still managed to get severely sunburned.

The bed and breakfast was quaint, breakfast company was interesting, and the food was lovely.That evening, a huge thunderstorm added to the ambiance of the turn of the century mansion. I had such a feeling of deja vu, not only in the house, but from the minute we descended into the valley.

The town has an interesting history, formerly known for it’s coal mining. It was like a glimpse into the past.

Upon arrival, we found a homemade gourmet hamburger joint, which was delicious, and very filling. Then it was off to the graveyard, to find the graves of two relatives, who were early pioneers in the area, however, we came up empty handed, and left with only mosquito bites, since they swarmed us as soon as we got out of the vehicle. 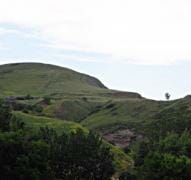 Sadly, this is the only picture of the landscape I managed to snap, as time did not permit for all I had hoped to do. So I will have to go back, as the land surrounding the town has amazing badlands, which have an astounding magnetic power.

Drumheller is the number three tourist destination in Alberta, with it’s population tripling during the summer months.

Although I didn’t sell a single painting, I had many positive comments about my work, and I managed to pass out some business cards. Also, I connected with some wonderful artists, and even received an invitation to come back to play music, for the spring music festival in East Coolie, which also has a gallery in a restored school house.

One of the artists I met, suggested I could possibly sell my work there. So all was not lost, and the weekend was truly an adventure. Now it is back to the easel for me.