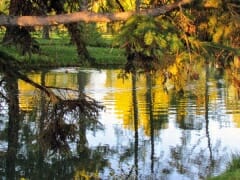 This is the golden hour by the river in Bowness Park in my neighborhood. Shortly after this picture was taken many golden leaves scattered to the ground. Like hundreds of mini suns.

In the night trees swayed in the early autumn wind, giving the streetlamps the illusion of flickering. Nearby the groan of metal wheels on steel tracks heard in the distance quieted the sound of the coyotes. In this magical golden hour shadows slip between the cracks like forgotten thoughts. 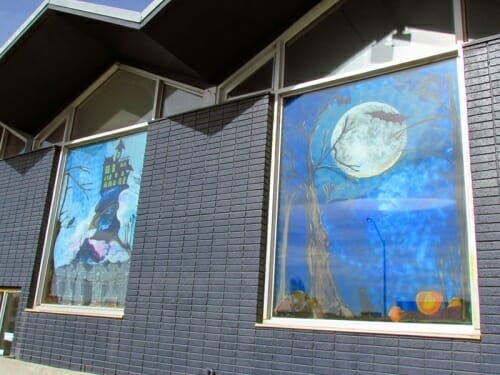 As promised, here are the window murals I did this week at The Costume Shoppe for Halloween. Painted windows are difficult to photograph. This is the best shot I could get, but you get the idea. It was my first time painting on glass, so it was a challenge to understand how the paint would behave-or not. 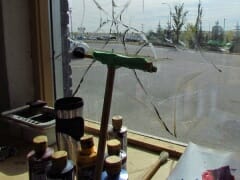 The sun was shining in my eyes for a large part of the time. I worked over a stairwell for the one, so I had to devise an extension for my brush, as no ladder could be used. It was a fun task, and I would do it again.

Painting the insides of the windows meant everything was reversed, which meant things are done in reverse. Frequent trips outside were required to see how it looked. Regular brushes cannot be used on their own, as they leave brush marks. I used glow in the dark solar paint for things like the moon, so it will glow at night. 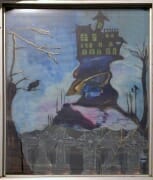 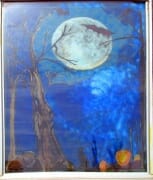 Once in a golden hour,
I cast to earth a seed,
And up there grew a flower,
That others called a weed.

All the photographic images on the website are by me. Inquire about purchasing prints or licensing opportunities. Deborah Robinson © All Rights Reserved
20,838 spam blocked by Akismet